What is the Doing Business project about?

The Doing Business project from the World Bank provides objective and quantitative measures of business regulations and their enforcement across 190 economies and selected cities at the subnational and regional levels, which serves as an important indicator for multinational companies when choosing potential economies to expand their businesses.

Data of the report focuses on 12 areas affecting small and medium-sized domestic firms in the largest business city of an economy, in which 10 areas’ performance are quantified to generate the ease of doing business score and ranking of an economy.

Details of the 12 areas being evaluated are shown below: 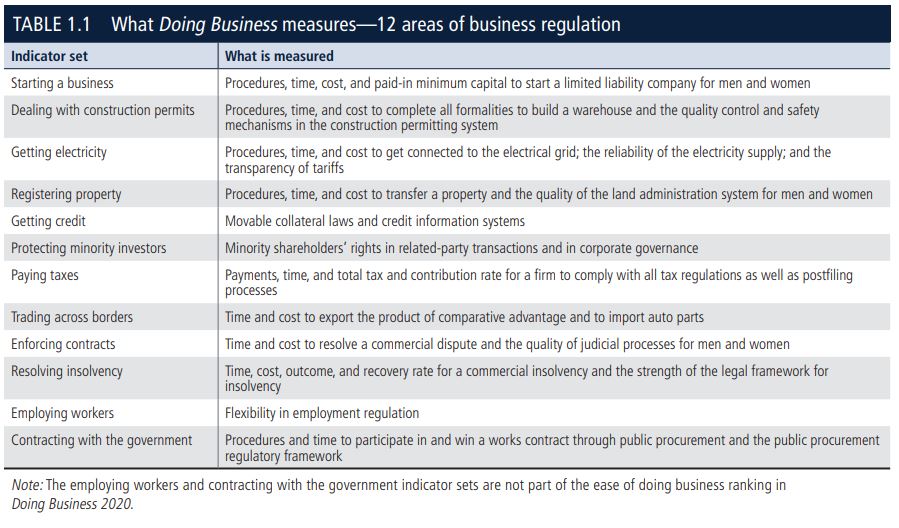 In addition, Doing business offers detailed subnational studies, which exhaustively cover business regulation and reform in different cities and regions within a nation. These studies provide data on the ease of doing business, rank each location, and recommend reforms to improve performance in each of the indicator areas. Selected cities can compare their business regulations with other cities in the economy or region and with the 190 economies that have ranked.

What are the meanings of higher scores and rankings in Doing Business? 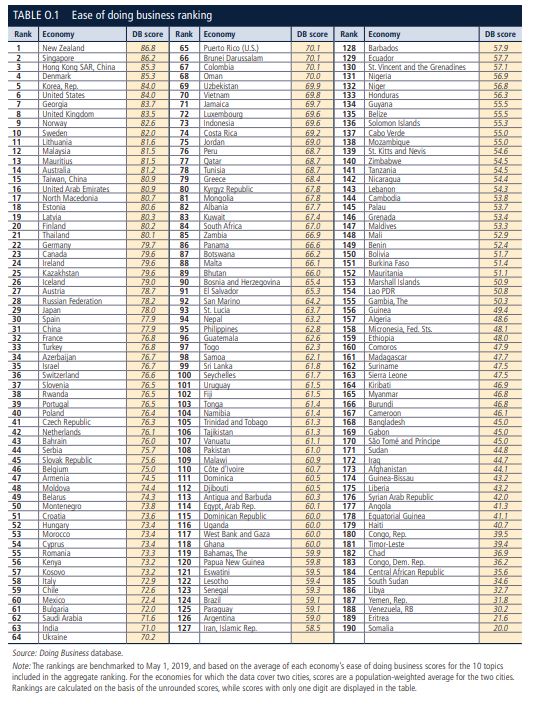 It should be noted that the economies that rank highest on the ease of doing business are not those where there is no regulation, but those where governments have managed to create rules that facilitate interactions in the marketplace without needlessly hindering the development of the private sector.

For example, below are some potential scenarios that get higher scores:

2. Apply a risk-based approach to regulation as a way to address social and environmental concerns
-Higher scores are given for placing a greater regulatory burden on activities that pose a high risk to the population and a lesser one on lower-risk activities.

3. A simplified way of applying regulation that keeps compliance costs for firms low
-Higher scores are given for easing the burden of business start-up formalities with a one-stop shop or through a single online portal.

The indicators are based mostly on laws and regulations, where approximately two-third of the data embedded in the Doing business indicators are based on a reading of the law. Some data are collected through several rounds of expert respondents, including both private sector practitioners and government officials, through responses to questionnaires, conference calls, written correspondence, and a visit by the team. 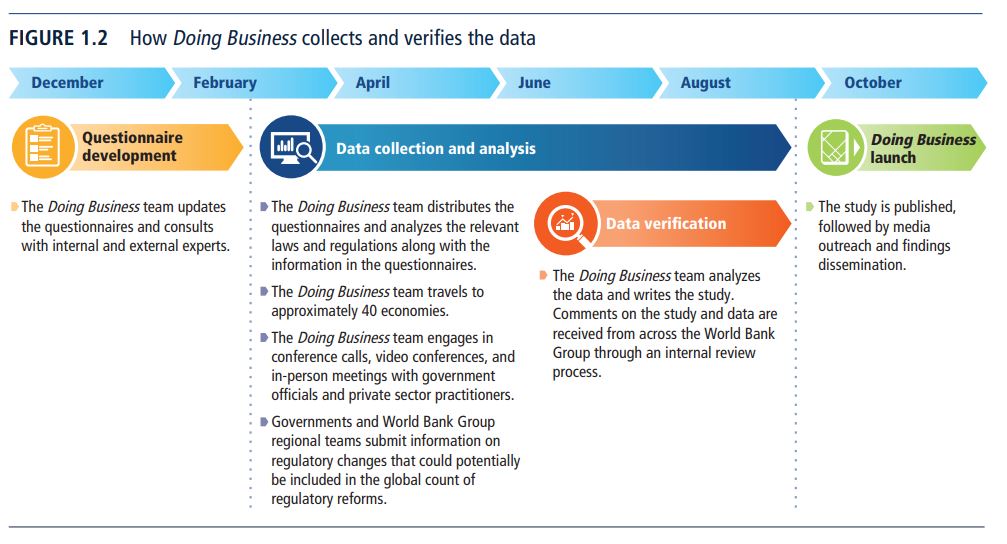 Four main sources of information for the report:
1. The relevant laws and regulations
2. Doing business respondents
3. The governments of the economies covered
4. The World Bank Group regional staff

Extensive consultations with multiple contributors, whose role is largely advisory on helping to locate and understand the laws and regulations, are conducted to minimize the measurement errors for some data. For example, on dealing with construction permits, enforcing contracts, and resolving insolvency, the time component and part of the cost component are based on actual practice rather than the law on the books.

To ensure a better estimate of time, Doing Business breaks down each process or transaction, such as starting a business or registering a property into separate steps. The time estimate for each step is given by practitioners who have significant and routine experience in the transaction.

Limitations of the measurements

The Doing Business methodology has at least five limitations that should be considered when interpreting the data:

1. The collected data refer to businesses in the largest business city and may not be representative of regulations in other parts of the economy.

2. The data often focus on a specific business form, which is generally a limited liability company of a specified size that may be not representative of the regulation on other businesses, such as proprietorships.

3. Transactions described in a standardized case scenario refer to a specific set of issues and may not represent the full set of issues that a business encounters.

4. The measures of time involve an element of judgment by the expert respondents. When sources indicate different estimates, the time indicators reported in Doing Business represent the median values of several responses given under the assumptions of the standardized case.

5. The methodology assumes that a business has full information on what is required and does not waste time when completing procedures.

In practice, completing a procedure may take longer if the business lacks information or is unable to follow up promptly. Alternatively, the business may choose to disregard some burdensome procedures.

Notes:
All of the graphs are quoted from and the content is composed according to the reports of Doing Business