Inflationary pressure in the United State has been piling up since the middle of 2020, whose price level as measured in the consumer price index(CPI) increased from almost zero per cent to 8.5% in May 2022, marking four-decade highs. During the same period, price levels in ASEAN economies also demonstrate an upward trend. Among selected economies, namely Thailand, Singapore, Vietnam, Malaysia and Indonesia, Thailand and Singapore seem to have endured a biggaprice increase pressure compared to the other counterparts. In contrast, Malaysia’s price level has been levelling off while Vietnam’s and Indonesia’s rates h started to climb up at the beginning of 2022. 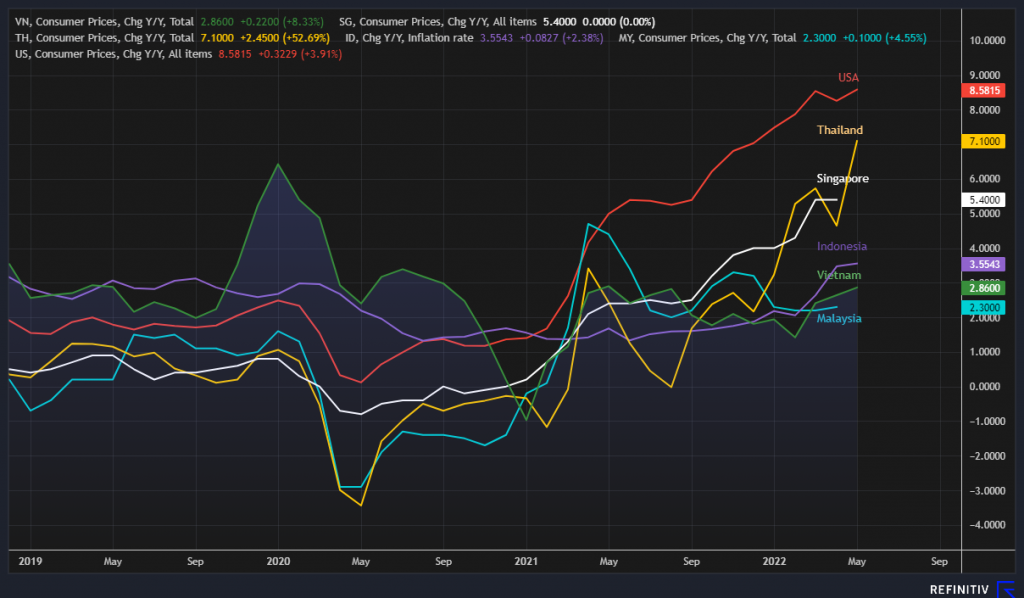 The selected economies presented different price level dynamics in recent years. The rates of Malaysia, Singapore and Thailand largely synchronised since 2019, which dropped significantly in 2020 under the backdrop of Covid-19 and then quickly rebounded. However, Malaysia’s rate has lost rising momentum since the first half of 2021 to remain at 2 to 3%.

On the other hand, the price level of Indonesia and Vietnam behaved differently from their counterparts.  In the past few years, Both Vietnam’s and Indonesia’s CPIs levelled off and centred at around 2% and were consistently higher than Singapore and Thailand before 2021. 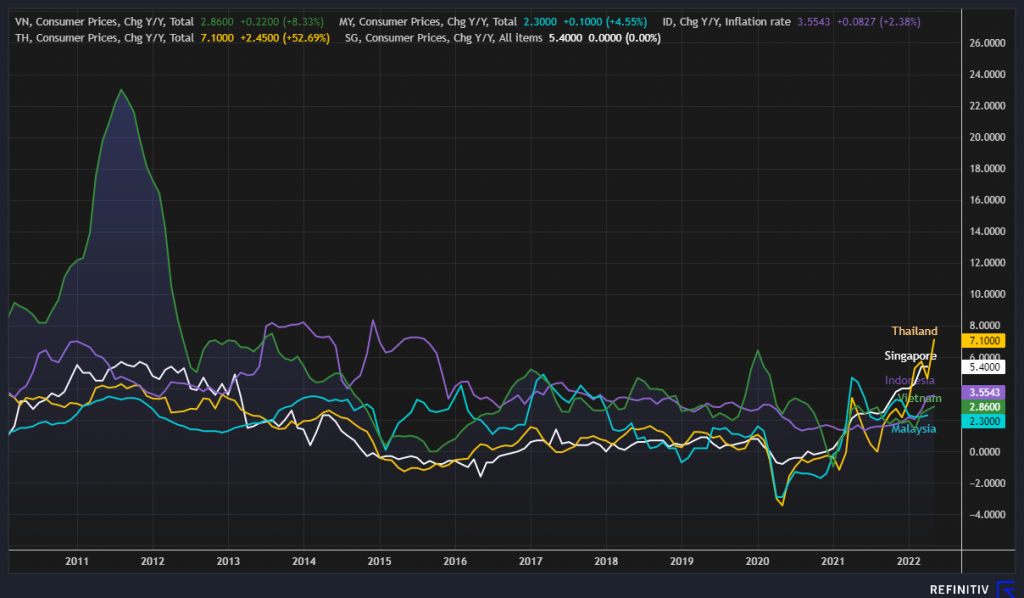 A. Ad hoc explanations for the increase in the price level

Demand-Pull Factors for increases in the price level

I. Strong recovery in global growth and demand

Following the broad vaccination schemes rolled out worldwide, the transmission and death rate of COVID-19 have seen a significant decline. The ASEAN countries started to repel or loosen their lockdown measures, leading to a widespread reopening of economic activities and a surge in global demand. Figure 1 shows that the GDP growth rate of the selected countries rebounded collectively in the second half of 2020. In theory, demand spikes along with robust GDP growth allowed sellers to jack up the price without losing market shares. 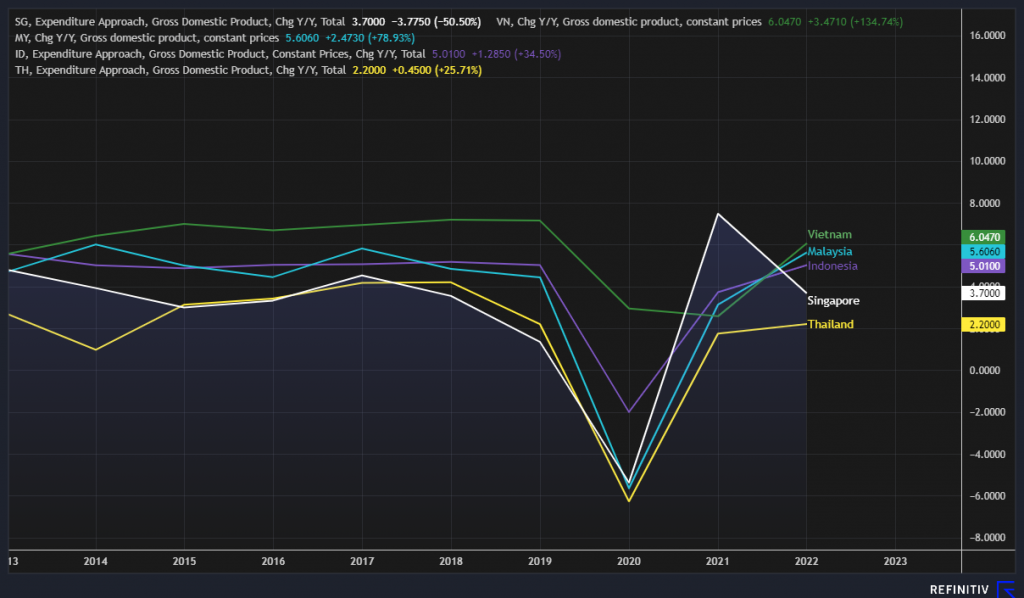 Cost Push Factors for increases in the price level

I. Increase in oil price

After the drastic drop in the first half of 2020, the oil price has been increasing continuously since then and reached its highest point at over $120 in recent months since 2014. Serving as a raw commodity for many goods including Petrol and diesel, plastics, cosmetics, etc, the price increase in oil led to the price increase in the whole oil-dependent production line, such as transportation and utilities, which are two of the main components in CPI measurement basket. 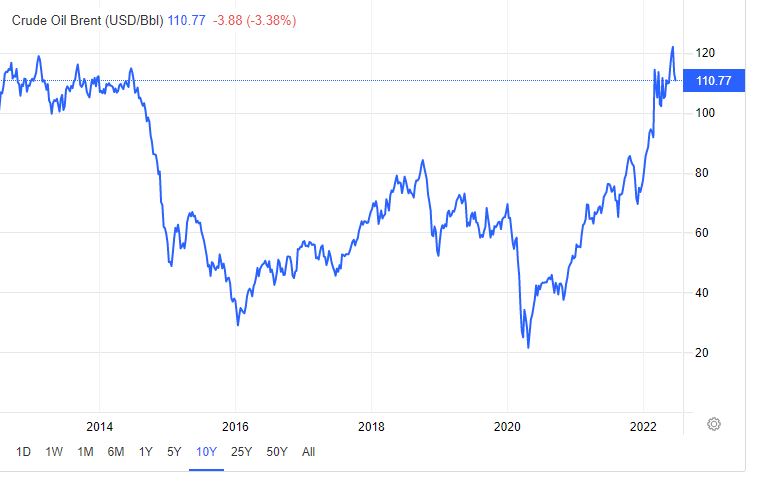 The spread of the virus impacted the global supply chain in many ways. China, as the largest exporter in the world, has adopted the “zero covid policy” to contend with the virus. Other than the decrease in productivity of the factories, the workforce in ports was divided into several teams to ensure the outbreak of pandemic will not lead to a “total loss” of workers at a time, but the strategy again harmed the productivity.

According to the OECD, around 90% of goods around the world are transported by sea. However, the shipping cost increased significantly in 2020 and 2021. The Drewry world container index measuring the cost of moving a 40ft container stood at over 10,000 at the end of 2021, more than 6 times compared to the pre-pandemic level. 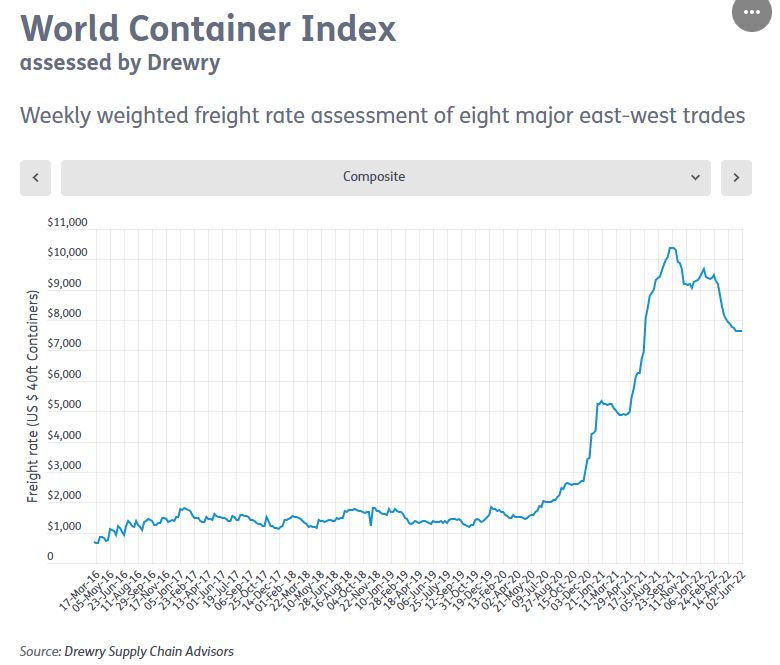 After the outbreak of the pandemic, most countries chose to adopt border control to prevent imported transmission, which in turn limited the foreign manpower inflows. While following the economic recovery, demand in labour bounced back and the unemployment rate in the selected economies gradually fell back to close to the pre-pandemic level. Fiercer competition of labour in the domestic markets pushed up the wage growth in these counties.

Wages as a major part of production costs are directly linked to the price of end products as sellers will shift parts of their cost burden to consumers, thereby adding fuel to the increase in the price level. Besides, the wage-price spiral may play a part too, which suggests workers with higher increases in price level expectations will demand higher wages to keep up their purchasing power, whereas higher wages, in turn, boost the demand for goods and services and cause prices to rise. The cycle keeps looping and thus forms a wage-price spiral. 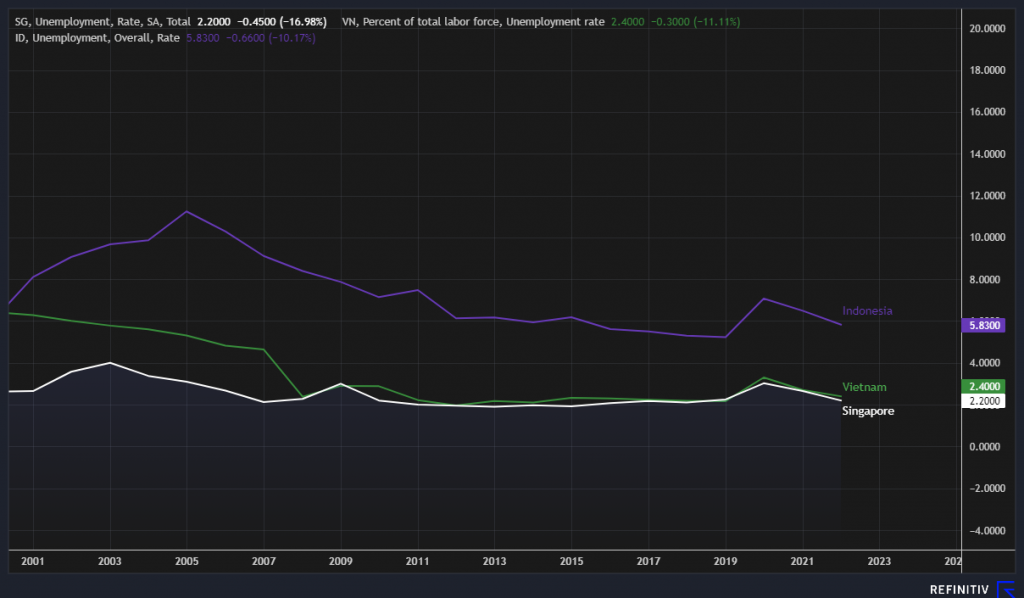 With the advent of the pandemic, the demand for remote work and learning strengthened and caused a surge in demand for computers, network peripherals, and other electronics with chips. However, lockdown measures reduced the productivity of chip factories at the same time. As a result, the chip shortage led to price increases in automobiles, computers, home electronics, cars and so on, some of which are necessities to households. It means the households will be likely impacted by the price increase of those products.

B. Monetary explanation for increases in the price level

I. Quantity Theory of Money

Other than the ad-hoc explanations, monetarists rely on using the change in the quantity of money to explain inflation, as the famous economist Milton Friedman once said “inflation is always and everywhere a monetary phenomenon”.

Quantity Theory of Money, formulated by Polish mathematician Nicolaus Copernicus and later popularised by the economists Milton Friedman and Anna Schwartz, indicates that the change of inflation rate is largely equal to the percentage change of money supply plus percentage change of velocity minus perchance change of real output. Empirically, the change in the velocity and the real output were much milder than the quantity of money. Therefore, monetarists focus on the change in the quantity of money when explaining inflation.

According to Friedman, the change in the quantity of money takes about 5 to 6 months to affect people’s spending, and 12-18 months to work through the price. Figure 9 shows the year-on-year percentage change of M3 in Singapore and that of its core CPI. The patterns of the two lines mostly align after a time delay, wherein the CPI follows the pattern of M3 one to two years prior. Figure 10 shows the case in Malaysia, whose CPI also partly followed the lagged pattern of M3. 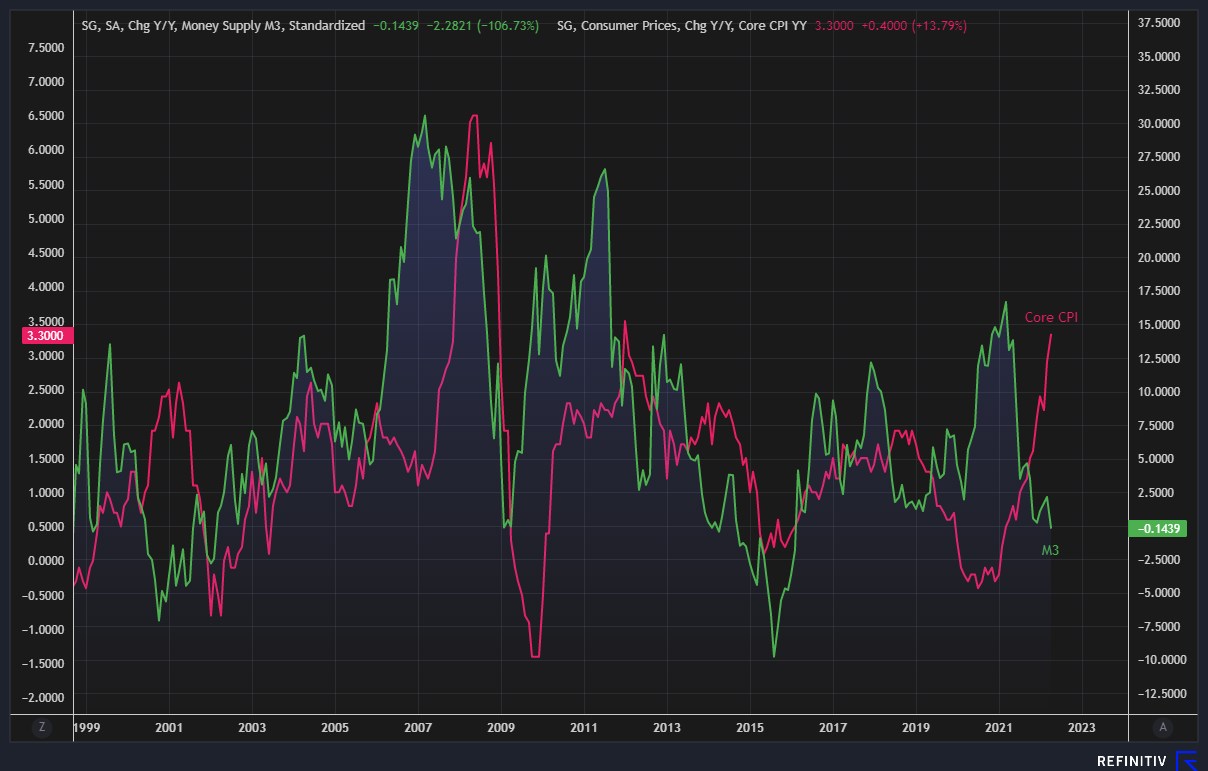 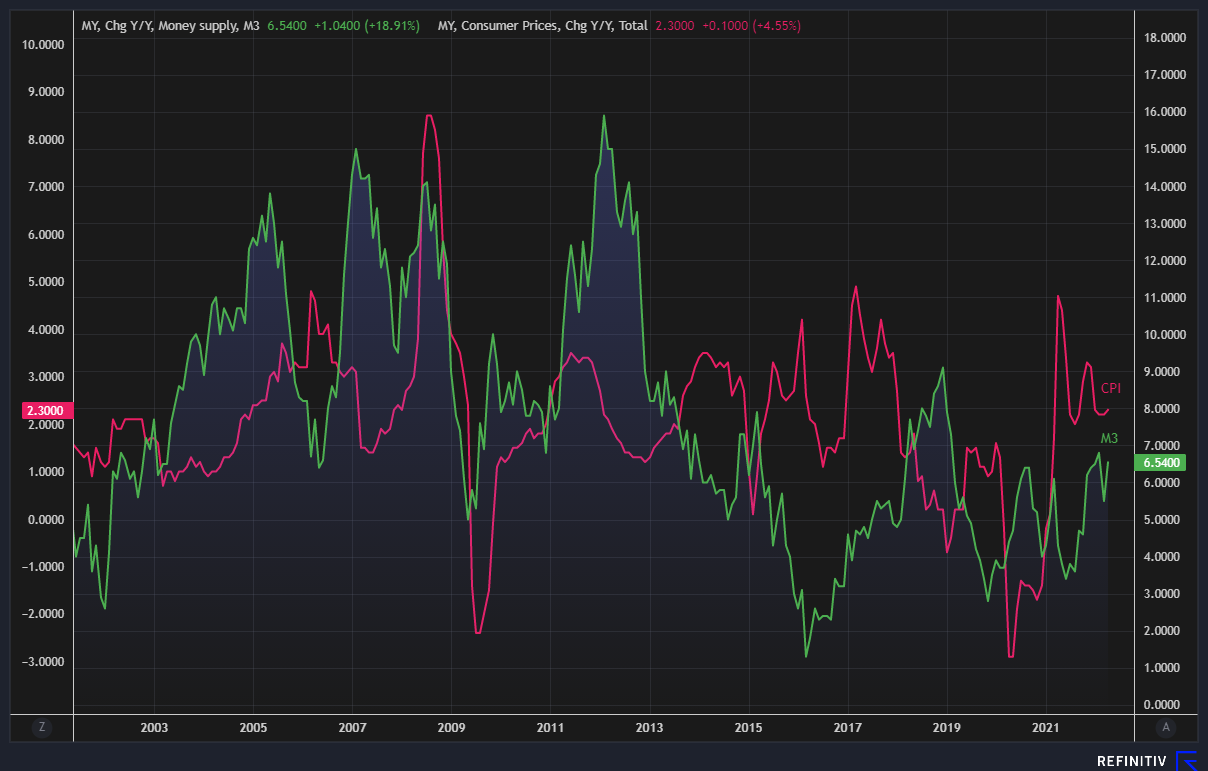 According to the definition of inflation in the book “Exchange & Production” written by Armen A. Alchian & William R. Allen, inflation is a rise in the cost of living resulting from a persisting rise in all money prices.

The book suggests that “for inflation to occur, a change in the ratio of money to the supply of other goods is necessary.” That means they have to change differently in percentage terms to cause inflation or deflation. For example, a tsunami strikes and severely ruins the farmland in a country, whereby the supply of crops falls. If the stock of money does not change, in theory, the price of crops will increase. However, if the stock of money decreases at the same rate as the stock of crops, inflation is not likely.

As illustrated by the book, “if each of us awoke today with twice as much money as yesterday and no less of any other goods and services, we would spend some of the new money for other goods to reduce the excessive proportion of our wealth held as money”. The demand for the goods will go up, and then the prices and wages follow. The same logic of the story applied to any country that has a money supply growing faster than the real output.

Greenwood and Hanke (2021) studied the hike in price levels prevailing in the United State and claimed that the real cause of inflation in the US lies in the substantial excess of broad money growth that causes increases in the overall price level rather than the widespread view of supply chain disruptions per se.

How does an increase in price level influence households and businesses?

If the general price level increases, the financial burden on households goes up. Take Singapore as an example. According to the breakdown of Singapore’s increase in the price level in 2021, the price of housing and utilities increased by 1.4% in 2021 compared to a 0.3% decrease in 2020. The category ranked top in the measurement basket of selected goods and services with 24.8%.

Food accounted for 21.1% as the second biggest category, whose price increased by 1.4% in 2021. Transport took up 17.1% to rank third. The price of transport increased significantly by 8.8% in 2021 compared to a 0.7% decrease in 2020. Simply put, the households in Singapore spent more generally, with the main additional burden coming from transport.

Figure 11 shows that Singapore’s price level has been increasing since 2020. It stood at 5.4% in April 2022, approaching the 10-year high. Despite the efforts of the Monetary Authority of Singapore (MAS) to tighten monetary policy, there is no reversing sign of the upward trend to be seen yet.

Other than the end products, an increase in price level may be reflected in the price of production costs. Sellers undergoing higher production costs will try to transfer the cost burden to consumers. The efficiency the transfer depends on the sellers’ market power and the demand elasticity of the products. For those who sell identical products and possess a tiny market share, they cannot jack up the price or will lose all their market share to competitors. In contrast, those with market power such monopoly, can effectively transfer their cost burden to consumers by setting a higher price. If their products are demand-inelastic, where the percentage change in price is greater than that in quantity demanded, jacking up the price will even expand the profit margin.