From the mid-1980s to the beginning of the 2000s, Hong Kong’s price level as indicated by the Consumer Price Index fluctuated significantly, reaching the top of around 13% in 1991 and then falling into a negative zone after the Asian financial crisis. In contrast, the CPI from 2006 onwards has shown much lower volatility than in the past two decades with the index centering around 2%. 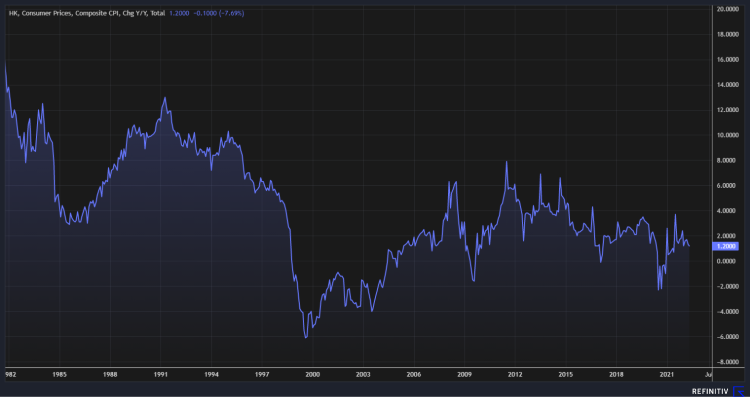 According to the paper “From Inflation to Deflation: A Novel Experience for Hong Kong” by Chiu (2003), it put forward several reasons to explain the fluctuation during the said period, including the changes of economic conditions and the exchange rate system of Hong Kong.

After China adopted the “open door policy”, many manufacturers shifted their production lines to Mainland China due to lower production costs such as lower wages and rents. When manufacturing was dying in the city, the service sector started to develop and gained more importance at the same time . After the economic reform, China’s economic growth expedited and induced a great demand for the services in Hong Kong, thereby pushing up the salaries of the professionals in the city. Higher income translated to greater demands for general goods and services and therefore an increase in the price level.

Due to high inflation in the early 1990s, negative real interest rates  emerged and raised concerns on how to preserve if not increase the value of money through investment. Real estate as a good hedge in the time of high inflation naturally became an investment target as property prices and rents tend to rise when inflation increases. Consequently, the increase in rental price pushed up the prices of output, and therefore price level.

While the system ensures stability of the exchange rate, the value of the HKD cannot freely adjust according to the local economic condition, forcing the adjustment pressure to be dredged by the other channels like wages and prices but the exchange rate.

To restore and maintain the confidence of investors before Hong Kong returning to China in 1997, the Hong Kong government launched an enormous infrastructure project to build the new airport at Chek Lap Kok that costed nearly 100 billion HKD. The huge injection of money from the government led to larger inflationary pressure on Hong Kong.

During the early 1990s with the increasing price level, Hong Kong’s real GDP growth and the unemployment rate were maintained at 5% and 2% per annum respectively. The economy was deemed to have reached full employment considering people changing jobs and new graduates looking for jobs.

The serious shortage of labour led to higher wages. When wages increased, employers shifted part of the cost burden from the increased wages to consumers by raising the prices of their products. Meanwhile, employees with higher income increased their demand for goods and services and thus pushed up the price level.

Negative growth of price levels after the Asian Financial Crisis

Due to the Asian financial crisis in 1997, a lot of Asian cities underwent a huge capital outflow . The financial systems of South Korea and Indonesia collapsed with their currency depreciating severely. Contrarily, Hong Kong managed to keep the HKD at the fixed rate with the USD by exerting foreign reserves to defend the speculation. As a result, the HKD appreciated against other Asian currencies, which coupled with further economic integration with Mainland China led to the decline in price levels during the late 1990s and early 2000s according to Chiu (2003).

I. Inability of Hong Kong dollar to devalue

When the Hong Kong dollar appreciated, the exported goods and services became relatively expensive compared to that of other countries with weak currencies. As such, local exporters faced lower demand from the world and had to reduce their prices in response. The reduced profitability in turn forced the exporters to cut wages. The whole process continued until the goods and services regained competitiveness in the world market, which contributed to the drop in the price level. However painful, that was the adjustment mechanism under the linked rate system when the currency was overvalued.

Since China launched the “open door policy”, its economic connection with Hong Kong has been growing tighter day by day and caused a structural change in Hong Kong’s economy from manufacturing to services afterwards. The root cause of the change lay in the differences in factor prices between the two regions.

No matter in terms of the price of properties or general goods and services, the Mainland’s offers were way more attractive than that of Hong Kong and shifted much of consumption and investment demands from Hong Kong to the mainland. As a result, deflationary pressure arose and the general price levels in Hong Kong went down.