A perfect storm has been riding on Sri Lanka that causes a widespread impact on its economy, society and order. Due to the reckless tax cut and the sluggish tourism sector caused by the COVID-19 pandemic and Russia-Ukraine War, the Sri Lanka government’s revenue dropped sharply with its budget deficit picking up. On the other hand, the War has led to a decline in food and oil exports in the world market inflating the corresponding product prices.

What is even worse is that Sri Lankan Rupee has devalued so much that it pushes up the price of oils denominated in the local currency. Because of the worsening financial condition, the country cannot afford to import enough oil and food supplies. The inflation rate in the country shoots up to 54.6% year on year in June 2022, wherein food inflation accelerated to 80.1%, compared to below 10% in 2021.

People also suffer from a shortage of power. lengthy queues present in front of gas stations, public transportation services halt and government offices and schools needed to temporarily shut down. The long-lasting plight transformed citizens’ fury into a series of protests.

The causes of the crisis are multi-layers, ranging from financial mismanagement, inappropriate fiscal and monetary policies, and the impact of the pandemic and warfare.

Causes of The Crisis

The former president Gotabaya Rajapaksa of Sri Lanka launched an aggressive tax reform in past years that led to a massive loss of government revenue and consequently a reliance on money printing to cover spending. A series of tax cuts were put in place in 2019 in a bid to spur growth, which included increasing the tax-free threshold that led to a 33.5% decline in registered taxpayers, reducing Value-added Tax (VAT) to 8%, lowering corporate tax from 28% to 24%, abolishing “Pay As You Earn(PAYE) tax and 2% “nation-building” tax.

The shrunk revenue failed to cover the government’s spending and the budget deficits soared as a result. Rating agencies downgraded the sovereign credit rating in response, adding to the difficulties for the Sri Lanka government to raise money by issuing bonds. To cover spending, the Sri Lanka government resorted to monetary means of printing money despite the warning from the International Monetary Fund to stop printing and instead hike interest rates, raise taxes and cut spending. The reliance on printing machines later in turn contributed to high inflation and the depreciation of the Rupee. 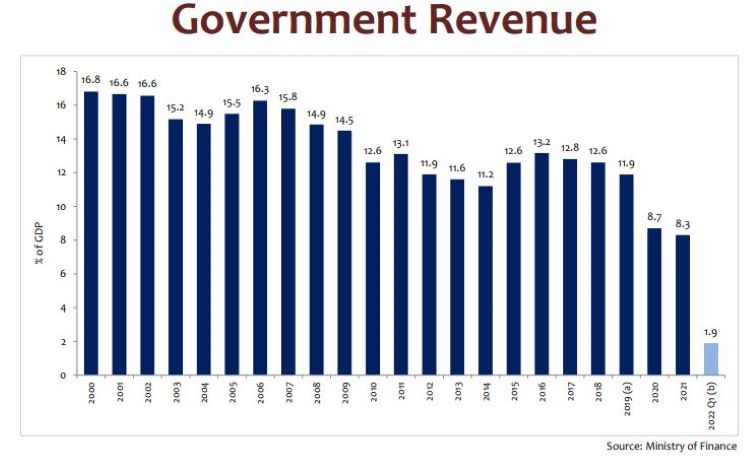 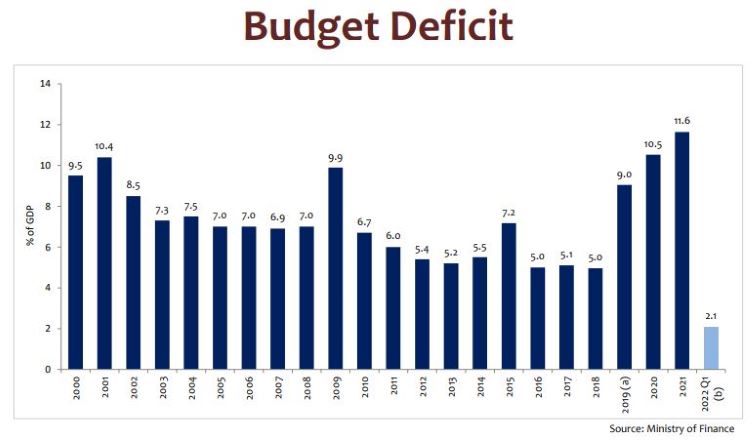 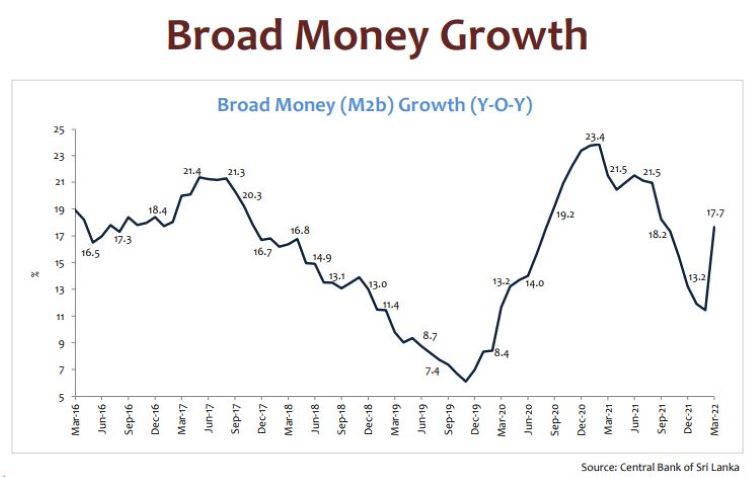 The worsening financial condition and gloomy outlook led to the downgrade of Sri Lanka’s sovereign rating by the three largest rating agencies, namely Fitch, S&P and Moody’s. As a result, investors tend to stay away from the country’s treasury bonds to avoid default risks, unless the yields are attractive enough. That is why the country’s bond yields picked up sharply in recent years, which of all tenures have risen to over 10-15% while US bond yields stand at around 3%. The yield differences represent the risk premium of Sri Lanka’s bonds over the US’s.

The heightened yields mean higher borrowing costs for the Sri Lanka government, which adds to the difficulties of economic recovery. This phenomenon is rather common for a poor country in a financial plight. It is pro-cyclical and partly explains why the International Monetary Fund, World Bank and other countries often provide a bailout to indebted countries as they did to Sri Lanka. 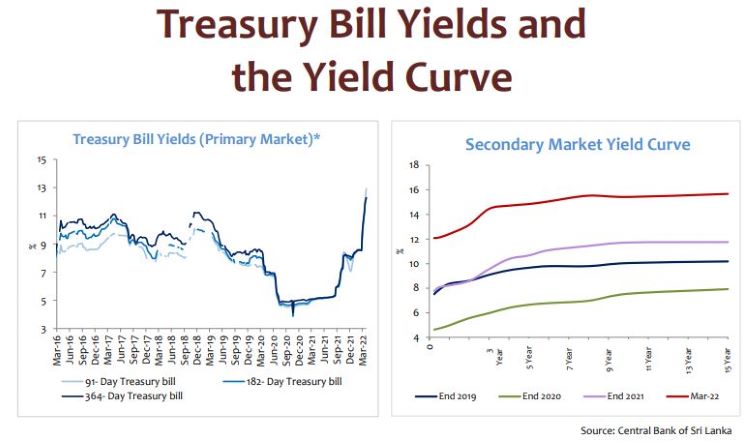 The tourism sector is vital to Sri Lanka’s economy as it accounts for almost one-tenth of the country’s GDP and is the third-largest source of foreign exchange reserves behind worker remittances and the apparel industry. However, the industry has begun to collapse since the 2019 Easter bombings and was further hit by the COVID-19 pandemic and the Russia-Ukraine War. The tourist arrivals and earnings from tourism dropped by over 80% in 2020 to 682 million USD compared to 2019 and further decreased to 507 million in 2021. The silver lining seems to emerge in the first quarter of 2022 with the rebound of monthly arrivals, but the ongoing turmoil might falter the recovery in the year. 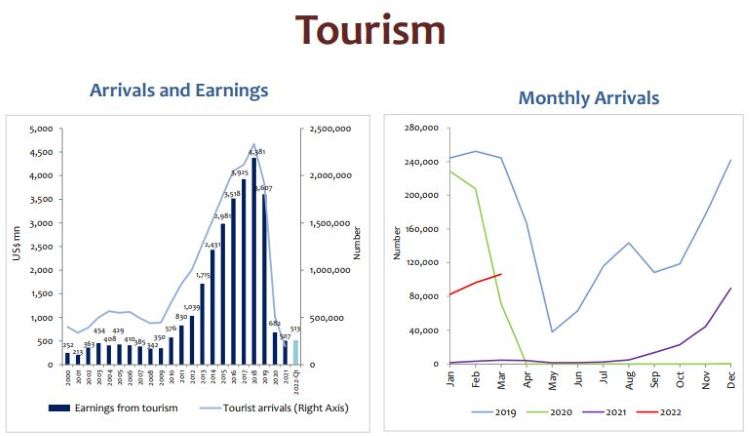 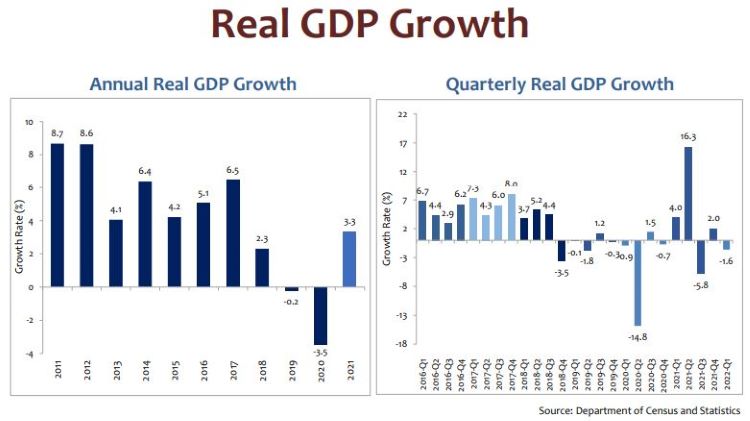 Sri Lanka’s foreign debt has increased substantially in recent years, going from about 42% of GDP in 2019 to 119% of its GDP in 2021. By the end of 2022, the country is due to pay $4 billion of foreign obligations and another 1 billion for an International Sovereign Bond (ISD) payment. The debt burden was too big to handle for Sri Lanka with only a government reserve of $2.3 billion left as of April.

As a result, on 12 April 2022, Sri Lanka announced a default on its foreign debts, making it the first sovereign default in the country’s history since its independence in 1948 and also the first country in the Asia-Pacific region to default in the 21st century.

As external debt is the portion of Sri Lanka borrowed from foreign lenders and normally needs to be repaid in the currency in which the loan was made. Failing or refusing to repay will be equal to sovereign default. As helpless as the country is, the depreciation of the Sri Lankan Rupee has enlarged the value of debt denominated in foreign currencies, making the debt even more affordable.

The exchange rate of one country’s currency is co-determined by lots of factors, including the country’s economic prospects, financial health, social stability, interest rate, money supply, etc. However, none of the above factors is conducive to Sri Lankan Rupee.

First, The country is now suffering from a mass protest and a lack of essential supplies such as food, electricity and gas. There is little sign of fresh supplies coming in and part of the economic activities grind to a halt as a result. The worsening condition in the country‘s finances and social stability weighs on the performance of the Rupee.

On the other hand, the country’s foreign exchange reserves have been almost depleted in 2022, which are the assets held on reserve by a central bank in foreign currencies. The reserve is significant to ensure that a central government agency has backup funds if its national currency rapidly devalues or becomes entirely insolvent.

However, the country’s reserves dropped from over 5 billion to below 2 billion in March. It should be part of the reason why the central bank abandoned the peg of LKR (Sri Lankan Rupee) to USD in March 2022. Without affluent foreign reserves, not only has the central bank lost bullets to safeguard its currency value, but investors’ confidence also faded. 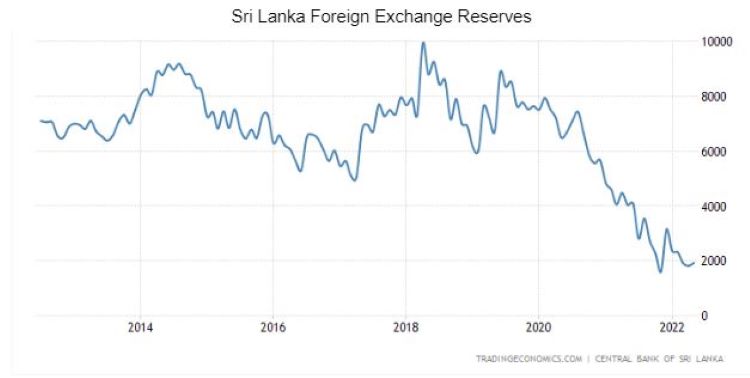 What is happening in the other corner of the world also matters. The hawkish central banks all over the world are punishing Sri Lanka through the appreciation of their currency. Due to overprinting of money and rising debt burden, the Sri Lankan Rupee was under pressure of depreciation and the worldwide aggressive rate hike catalyzed the process in March. The USD against LKR soared from around 200 in March to 360 in July, implying a 44% decline in the value of LKR relative to USD. Also, the LKR value relative to other major currencies plunged significantly in March.

The causes of LKR depreciation are twofold. First, investors are risk-averse and tend to minimize risks given the return. The economic and political outlooks for Sri Lanka are gloomy in the eyes of investors that LKR may suffer from great depreciating pressure in the future. The safe bet will be clearing the position of LKR to be insulated from the risk, which weighs on LKR. Another reason lies in higher returns of other currencies with worldwide rate hikes, relative to that of LKR after pricing in the risks.

Sri Lanka’s official currency LKR was pegged to the USD at the rate of 201 to 203 per dollar to ensure its exchange rate stability before March 2022, but the peg failed to fulfil its mission. LKR was traded in the black market at more than 200 Rupee to 1 USD. The foreign workers started to remit their foreign currency through the black market at a favourable rate instead of official channels. The foreign remittance dropped 61% in January 2022. 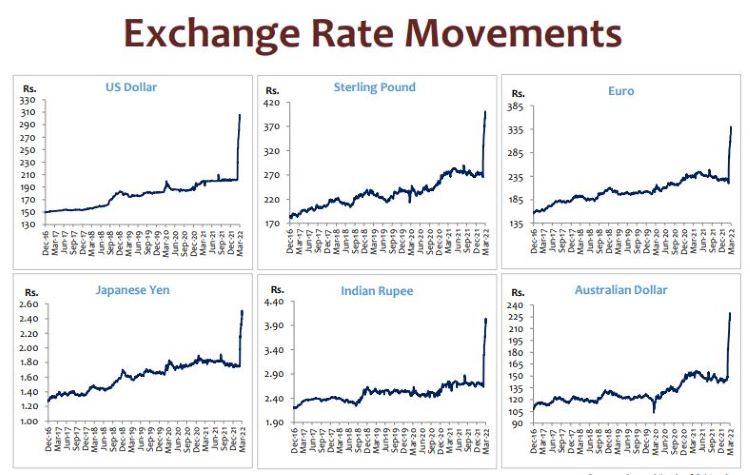 Bailout from the International Monetary Fund

On 25 February 2022, the IMF declared that the Sri Lanka debt was unsustainable and warned the government to refrain from printing money to restore monetary stability. In March, Sri Lanka president Rajapaksa made a statement to work with the IMF for relief.

Bailout talks underwent on 18 April in Washington where the Sri Lanka government urged immediate financial assistance through a loan package, but IMF insisted that the loans to Sri Lanka required debt sustainability, implying a reform to rebalance the government’s income and expenditure is needed as a prerequisite for the grant of the loan.

The IMF continued to discuss with Sri Lanka’s officials about the bailout program in June and July until a violent protest on 9 July that resulted in the resignation of the President and Prime Minister. IMF urged to resolve the political turmoil inside the country in a bid to resume the bailout talk.

The IMF mission team leaders Messrs. Peter Breuer and Masahiro Nozaki concluded after the visit to Sri Lanka that “because (the country’s) public debt is assessed as unsustainable, Executive Board approval would require adequate financing assurances from Sri Lanka’s creditors that debt sustainability will be restored.”

The IMF made it clear in the statement that the IMF-supported program to Sri Lanka would be to “restore macroeconomic stability and debt sustainability, while protecting the poor and vulnerable, safeguarding financial stability, and stepping up structural reforms to address corruption vulnerabilities and unlock Sri Lanka’s growth potential.”

The world bank agreed to provide 600 million US dollars in financial assistance to meet medicinal drugs and heald needs, social security, agricultural, food security and gas needs. The Bank also committed to continued support for the country to overcome the crisis.

Multiple countries have offered financial support to Sri Lanka during the crisis, including China, the US, Japan, Singapore, India and so on. The former prime minister Ranil Wickremesinghe said that the country needed at least 5 billion US dollars over the next six months to pay for essential goods.